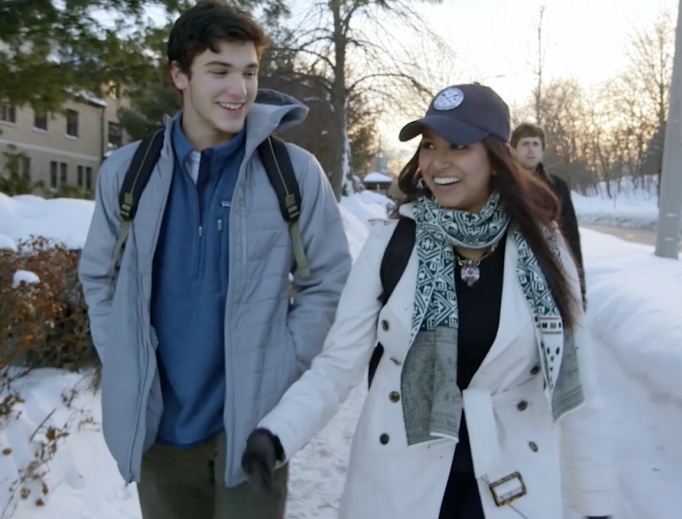 I am an avid reader of the National Catholic Register.  I especially like the Culture of Life section which focuses on living a Catholic life in a secular world whether that be in Danbury CT or around the world.  This article was in there most recent issue.

Restoring Courtship in a Hook-Up Culture: ‘The Dating Project’ Young adults discuss modern relationship woes in a new documentary.
Ella Hadacek
The Dating Project follows five young adults — college-aged to age 40 — from various cities around the United States as they look for commitment and a genuine connection with a member of the opposite sex in a society that increasingly shies away from romantic relationships.  It highlights the dating dearth in an authentic way.
The film, which will be in 600 theaters around the United States April 17 only, is based on a class taught by Boston College philosophy professor and Catholic Kerry Cronin.
In her class, Cronin — who is called “the dating prof” around campus — gives her students an unconventional extra-credit assignment: Go on a date.
Why Aren’t People Dating?
Cronin says she started giving the assignment because the students she encountered had no idea how to date. That problem doesn’t just appear on college campuses. The documentary reveals that, across the U.S., the struggle to go on a date — let alone start a meaningful relationship — is pervasive.

“Around the late ’80s and the early ’90s, on college and university campuses, the dating script sort of fell off the radar, and the hook-up culture took hold. ‘Hooking up’ had been around for a while — maybe forever — but it really took hold in the party scene,” Cronin told the Register.
“The culture stepped further along into that, and for a while, dating was running parallel with the culture, and then dating sort of dissolved. The hypersexualization of culture also moved sexual intimacy to the forefront and moved courtship to the background.”
One young woman in the documentary, when asked what dating was, glibly replied, “Something I’d like to be doing more of.”
According to a Pew Research report, 61% of Americans under the age of 35 are living alone without a spouse or partner.
“What has the society come to that it has made it so difficult for us to connect to someone on an emotional, spiritual level — to actually embrace the meaning of love?” a young man interviewed on the street asks in the documentary.
‘Oversexualization’
Cronin says that the non-dating trend isn’t because young adults don’t want to date. Rather, they don’t know how to start dating, or they’re afraid to initiate a relationship because experience tells them it will become intense too quickly. She blames that on the way sexual intimacy has been moved to earlier in a relationship by modern culture.
“That is one of the main projects of my dating assignment: to bring back casual — low stakes — dating,” said Cronin. “Dating is high stakes partly because of the way our sexualized culture has hijacked dating. That is not to say that I think people are having sex earlier or more in young adulthood. In fact, the research shows quite the opposite, but the cultural signaling is indicating that we have to move major physical and emotional intimacy way up, early in dating.”
For the majority of people, that means courtship falls by the wayside, and sexual assertiveness becomes central to dating. For people who don’t want to have sex outside of marriage in order to adhere to the Church’s teachings on chastity, that sometimes means relationships end before they even begin because the other person is unwilling to have a relationship without sex.
Others avoid relationships altogether because they’re afraid of getting hurt when things get too intense. Cronin says that, often, couples jump into serious relationships without laying a foundation because they introduce physical intimacy too early in their relationship, to the detriment of hearts and souls.
As Cronin said, “When we say things with our bodies that we’re not ready to say with our words, we get into a muddle.”
Fixing the Problem
Cronin said that because modern culture doesn’t support dating, it’s much harder for men to ask women out on a date. For that reason, she doesn’t think men should have to do all of the pursuing.
“It’s really hard to ask people out on dates; it takes a lot of courage. I don’t think we should lean on men to be the only people who display courage,” Cronin said. “We all need to kind of step up a little bit, especially because it’s such a difficult countercultural thing right now.
Men don’t have a lot of cultural support on how to be a courageous man, so I think women and men need to bear the burden of courage together.”
Ella Hadacek writes from Idaho.
INFORMATION Find a theater: https://bit.ly/2GrbPNM Trailer: https://vimeo.com/201465998

Copyright © 2018 EWTN News, Inc. All rights reserved. Reproduction of material from this website without written permission, or unlicensed commercial use or monetization of National Catholic Register RSS feeds is strictly prohibited. Accessed from 32.209.15.188

View all posts by faithfamilyreason